The photographs on this page were taken by Bob Prigg in north Wales and Cornwall; member Ralph Rawlinson describes them as some of the best that Bob has taken. This page is slightly longer than others in this gallery, since we wanted to present them as a coherent set; apologies, therefore, if it takes a little longer than usual to load. Both locations are well served by public rights of way and access land, but exercise great caution around Cornwall’s old mines: few are open to the public, and hidden dangers may still exist. The safest approach is to view them from nearby footpaths or bridleways.

The first pictures are of the Croesor Tramway, which was built in 1864 to transport slate from Croesor Quarry, Rhosydd Quarry and various others to Portmadog on the coast at Tremadog Bay. The section of line from Croesor Junction to Porthmadog is being restored as part of the Welsh Highland Railway, the re-opening of which will make this remote area more accessible for those who wish to explore it; but north east of Croesor Junction, the tramway’s course will remain disused. There were at least five major inclines on the tramway network, that near Rhosydd exceeding a gradient of 1 in 1 in places, which made it extremely dangerous to work. The scenery here speaks for itself.

Moving south to Cornwall, the Liskeard & Caradon Railway was actually a tramway which carried copper, granite and tin from Caradon Hill (on the south east side of Bodmin Moor) to the port of Looe via Moorswater, near Liskeard. This is an extraordinary place, where the old industrial buildings – all of finely cut stone – put one in mind of the middle ages rather than 19th century industrial enterprise. These pictures really give the lie to the notion that old railways (and tramways in particular) are dull, or not worth exploring. 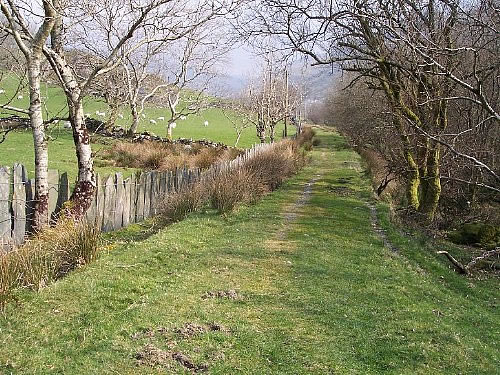 The Croesor Tramway starts innocently enough as a green trail alongside the Afon Croesor; but see what happens in the next pictures! March 2007. (Bob Prigg) 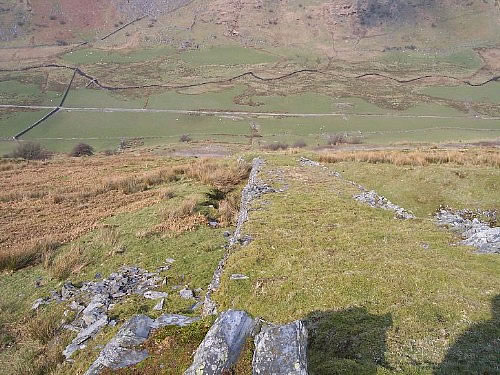 Despite the gentle start, the tramway has soon reached scenery like this. This is the view down one of the inclines. The junction where this branch curves in to meet the ‘main line’ can be seen clearly in the upper middle of the photograph. March 2007. (Bob Prigg) 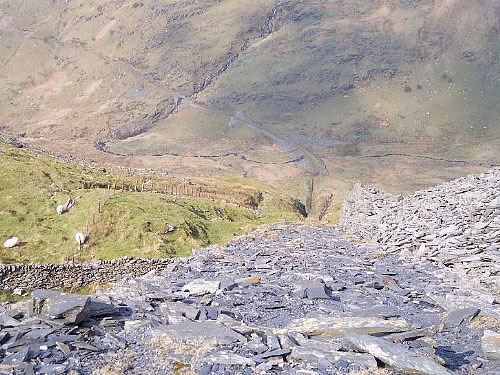 This is the view down the 1 in 1 incline that served Rhosydd Quarry. Surprisingly, this image does not convey the insane steepness of the structure quite so well as the photograph below, which has been taken from Wikipedia. There may be times when we rue the mollycoddling effect of modern health and safety regulations, but nowadays who would wish to be employed on a railway with a gradient like this?! March 2007. (Bob Prigg) 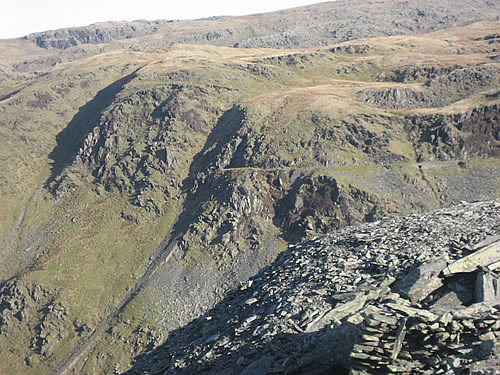 Yep, that’s an insane gradient. We rest our case. This picture makes one wonder whether Bob Prigg’s walk in this area was an example of railway rambling or mountaineering! Note that this photograph has been used under the terms of the Wikipedia Commons licence, which can be viewed here. February 2007. (‘Gwernol’) 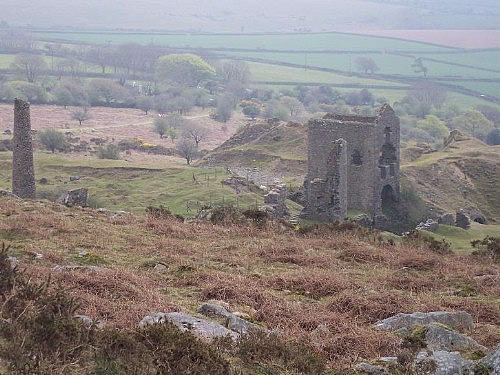 Above: The remains of South Caradon Engine House in Cornwall. The chimney stack on the left, and the spoil heaps behind the building, give away the site’s industrial origins. The beam engines in these structures were used most commonly for pumping water out of underground workings, although a few were used to haul wagons up steep inclines. This example at South Caradon worked Sumps Shaft, which is 250 fathoms deep, i.e. 1,500 ft. or 450 metres. March 2007. (Bob Prigg) 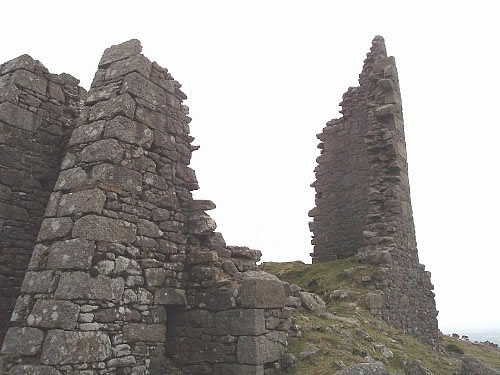 Viewed without the context seen in the picture above, the industrial remains on Caradon Hill really do take on a mediaeval quality. Notice the size of the corner stones, and consider the effort required to cut these to shape without modern industrial machines. March 2005. (Bob Prigg) 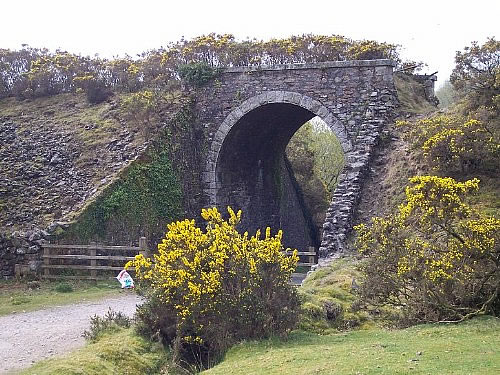 Above: Only one bridge survives on Caradon Hill from the Liskeard & Caradon Railway, and here it is at grid reference SX 254697. Trains ran over the arch, the track in the foreground being an unmade road from the tiny community of Crow’s Nest which is situated about a quarter of a mile to the south. March 2005. (Bob Prigg) 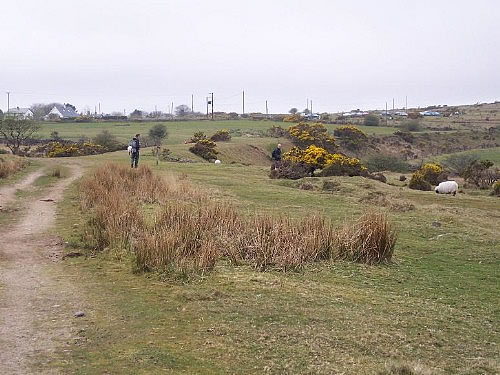 Above: The idea that tramways do not feature engineering works is mistaken, as can be seen from this view of an embankment on the trackbed of the former L&CR near Minions. As tramways go, this was a very substantial embankment – no doubt financed by profits from the local mines. March 2007. (Bob Prigg) 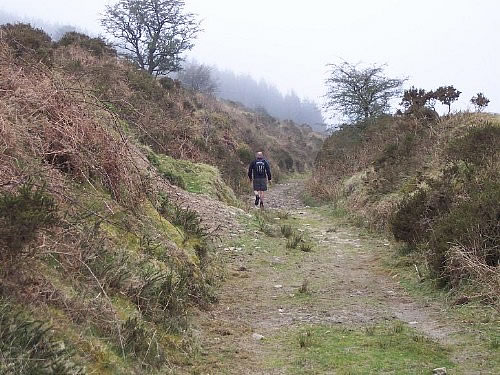 Tramways also had cuttings, as this example near Smallacoombe Downs illustrates. Given that the L&CR opened in 1846, this will have been excavated by pick and shovel. Think of the man-hours involved in that! March 2005. (Bob Prigg) 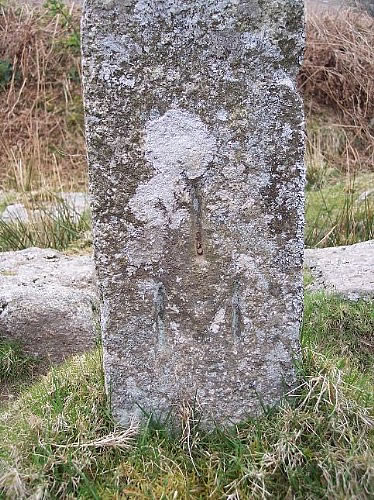 Just like any main line or standard gauge railway, tramways also had mileposts, as this example near Cheesewring Quarry illustrates. This clearly denotes 1 mile, presumably measured from the quarry, which is situated just under a mile north of the village of Minions. Mileposts were needed most in the event of an emergency, since they enabled railway staff to work out and report with reasonable accuracy where they and their trains were. March 2007. (Bob Prigg)

A final look at the Cheesewring branch, this time featuring the L&CR’s distinctive sleepers. This type of sleeper was commonplace on horse-drawn tramways and took the form of separate stone blocks (granite in this case) either side of a central ‘gangway’ where the horses pulled their load. The sleepers could not traverse the entire gap between the rails in order to avoid tripping up the horses. The stone block at the bottom right of this photograph clearly shows the two holes where large metal pins would have secured the rail to the sleeper. The area around Caradon Hill features many miles of trackbed like this. March 2007. (Bob Prigg)