The former GWR station site at Moretonhampstead is due to be cleared. A notice at the site entrance states that a developer has applied for permission to level the site and erect 35 new homes, although a local resident stated that the application has been granted and the scheme now provides for 39 new homes. This development will mean the loss of the town’s historic broad gauge engine shed and goods shed, but the developer has promised to provide direct access from Station Road to the newly-opened Wray Valley Trail, which re-uses much of the old trackbed south to Bovey Tracey. Currently, visitors wishing to use the trail cannot access it from Station Road, but have to walk uphill to the town square and turn left into Pound Street, then left again into Pudding Lane. The trail can finally be accessed at grid reference SX 753856. (Jeff Vinter) 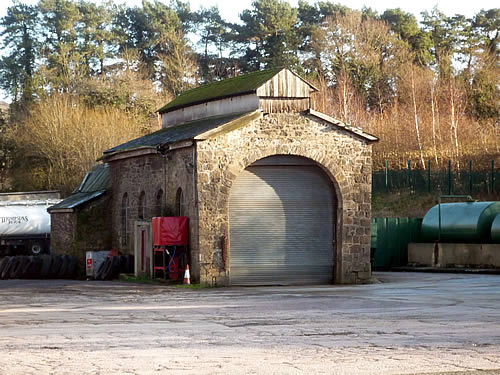 Above: The former GWR engine shed at Moretonhampstead in Devon was built by the Moretonhampstead & South Devon Railway in the early 1860s. Note how the walls fan out from the ground upwards: this is not a trick of the camera, so was the shed really built like this, or is the splay a sign of structural degeneration? The new Wray Valley Trail runs to the right of the shed, behind the three silver birch trees which can be seen in the upper right, above the green fuel tank. 15th January 2020. (Jeff Vinter)
Two views of the former GWR goods shed at Moretonhampstead. When these photographs were taken, the whole station site was still being used by B. Thompson & Sons (Transport) Ltd, but the company occupies a valuable piece of land in the town, and it is likely that they will walk away richer after selling it and moving to a new location. In the upper picture, the engine shed can be seen in the distance, in the upper left. In the lower picture, Thompson’s green livery recalls Southern Railway green – which seems a bit of an affront to an ex-GWR establishment! 15th January 2020. (Jeff Vinter)