Further to the above report, a visit on 15th January revealed that the new Wray Valley Trail is to become part of NCN28. Signs (albeit with a rather temporary appearance) have been erected, and a planning application has been made to install an information board at the start point in Pudding Lane, Moretonhampstead. Substantial bronze signs point the way from the town centre. 60 years elapsed between the railway closing and the trail opening, so one should not be surprised that the trail does not follow every yard of the railway’s former route. However, Dartmoor National Park Authority has made a good job of linking together those extant sections where landowners said ‘Yes’, and the diversions are generally within sight of the old railway. An imposing feature is a sheer-sided rock cutting just a few yards north of intermediate Lustleigh, where the station survives in private ownership. (Jeff Vinter) 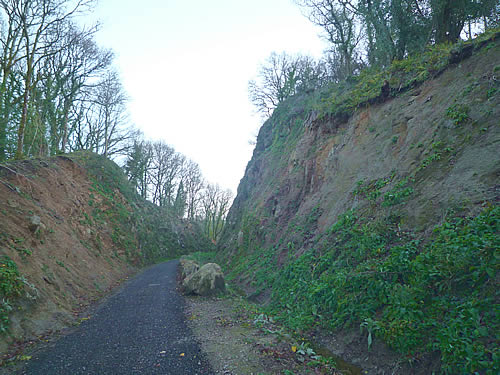 Above: The stone cutting at Lustleigh, looking south towards the former village station. Signs warn trail users to pass through here without stopping, and the size of the boulder on the trackbed leaves no doubt as to why this advice should be followed. The cutting dates from the early 1860s, which means that all this was excavated by picks, shovels and manual labour. 15th January 2020. (Jeff Vinter)