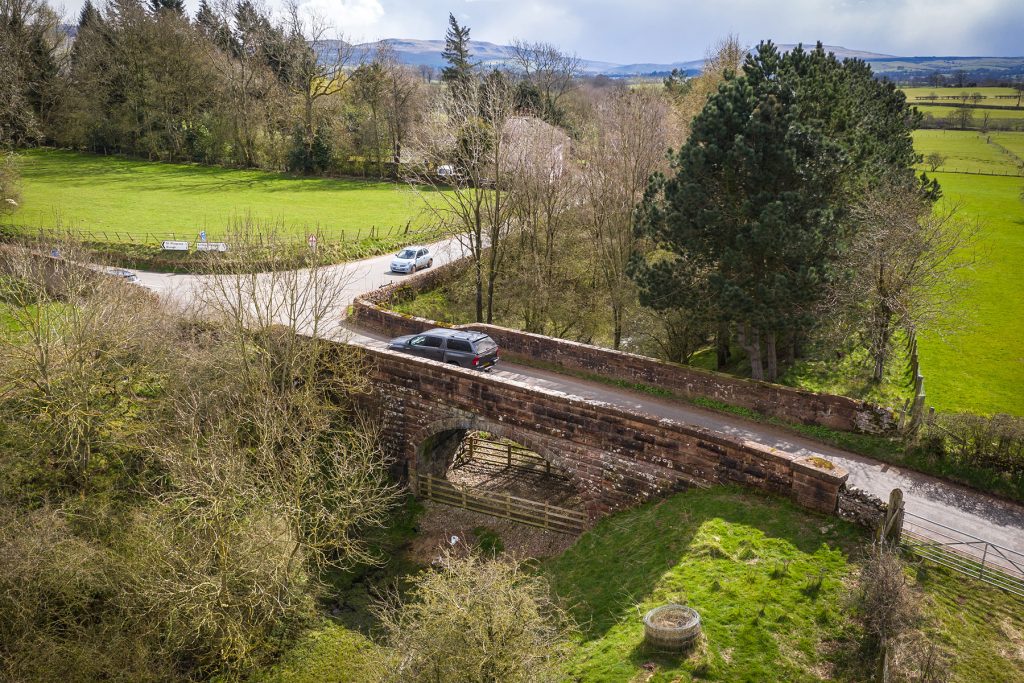 A masonry arched bridge at Great Musgrave in Cumbria which is slated for infilling despite being needed for a proposed five-mile connection between the heritage railway operations at Warcop and Kirkby Stephen East. Great Musgrave©TheHREGroup 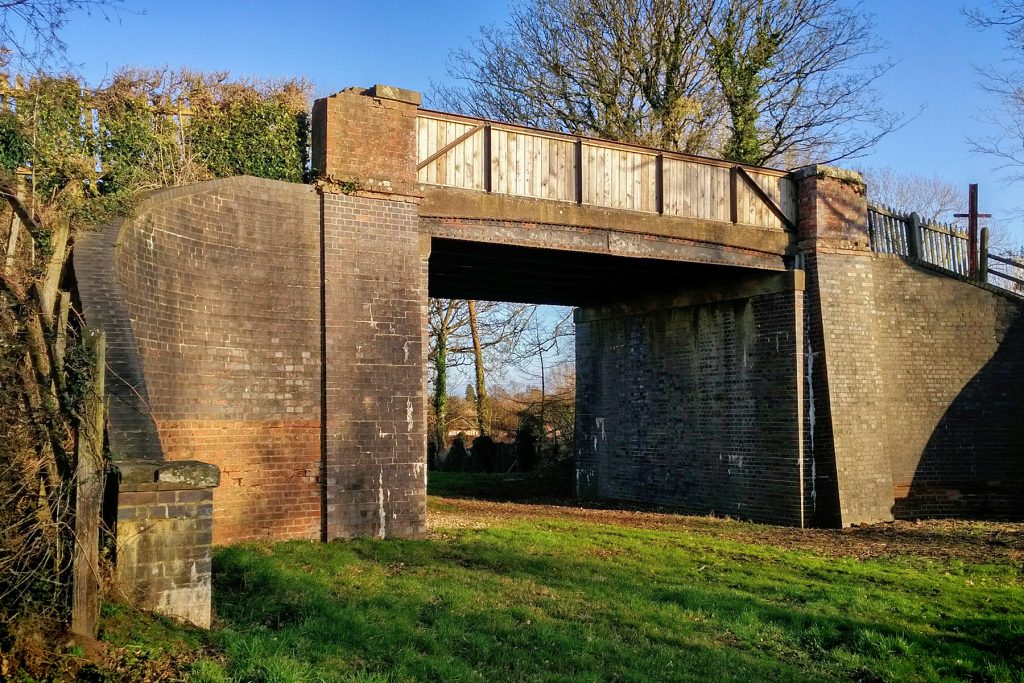 A wrought-iron bridge at Kinnersley in Herefordshire, at risk of infilling under Permitted Development powers, which spans the route of the proposed Hereford to Hay-on-Wye Greenway. Kinnersley©HerbieKnott/RexFeatures 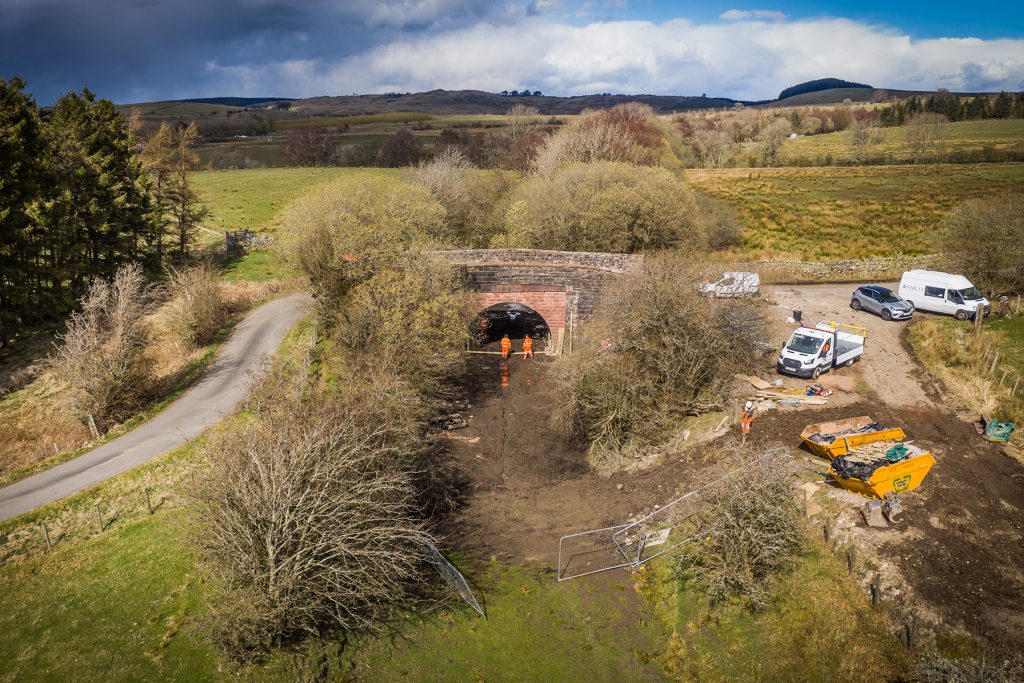 Contractors complete the partial infilling of a bridge on the former railway connecting Penrith to Keswick, which is proposed for reopening. The installed archway is not sufficiently large to pass trains through. Troutbeck©TheHREGroup

Video report about this issue from HRE Group

The House of Commons Transport Committee has intervened in a row over Highways England’s intention of infilling or demolishing hundreds of disused railway structures, many of which have the potential to play roles in future sustainable transport schemes.

The state-owned roads company manages the Historical Railways Estate (HRE) of 3,200 legacy bridges, viaducts and tunnels on the Department for Transport’s behalf. In January, it was revealed that 134 structures are going to be put beyond use over the next five years, with the possibility of 480 more to follow.

According to The HRE Group – an alliance of engineers, cycling campaigners and greenway developers – around one third of the bridges earmarked for infilling are already proposed for reuse as part of reopened railways, heritage line extensions or new active travel routes, or have identified potential to do so in the future. The Group says this “takes a wrecking ball” to Government policies encouraging more of us to walk and cycle.

Five members of the Transport Committee met a representative of The HRE Group last month and a letter has since been sent to Baroness Vere, the Minister for Roads, Buses and Places, and Nick Harris, Acting Chief Executive of Highways England, urging them both to view the structures as “assets to be preserved, repurposed for public benefit and enjoyed.”

The Committee makes clear that the Estate is not only part of our national heritage, but includes many assets with demonstrable public value. It says that the formal agreement under which Highways England manages the structures should be amended to reflect their cultural and strategic importance.

Chair Huw Merriman MP voices the Committee’s concern at the likely impact of the proposed infilling and demolition programme on future rail and greenway projects. He also challenges the use of Permitted Development powers which, in many cases, Highways England is invoking to progress work on structures that are effectively safeguarded from adverse development through policies adopted by local councils.

“The future of these historic bridges, viaducts and tunnels should be determined by an open, transparent and democratic process”, says Mr Merriman. “Highways England should assess both the safety and value of these structures and, in non-urgent cases, apply to local authorities for planning permission, if it wishes to demolish or infill them.”

He goes on, “we understand the average cost of infilling is around £145,000 per bridge, whereas the costs of strengthening to increase the capacity of historic bridges can be much lower, at £20,000 to £40,000 per bridge. We would like to know why it is better use of public money to infill, rather than strengthen, the bridges affected by the programme.”

The Committee notes that Highways England has objected to planning applications for new walking and cycling routes that are proposed to pass beneath HRE structures and has fenced-off parts of the Estate to which the public previously had access. Highways England and the DfT are asked to set out what steps they are taking to facilitate and encourage access to as much of the Estate as possible.

Graeme Bickerdike, a member of The HRE Group, said: “We welcome the Transport Committee’s scrutiny of the approach being taken by Highways England in managing the Historical Railways Estate. Supported by the DfT, the company is guilty of an assault on our great railway heritage and democratic process, pulling the rug from under those who are trying to build a better future for their communities.

“In Herefordshire, Northumberland, East Renfrewshire and elsewhere, proposals for new active travel routes are now in doubt because Highways England is recklessly pursuing infilling and demolition schemes without engineering justification or any prior appraisal as to the impacts of their actions.

“At a time when the value of fresh air and green space has never been clearer, it is unsustainable for the Government to allow vandalism of this kind if it expects us to take seriously its stated commitment to driving an active travel revolution.”

A petition against Highways England’s plans, launched by The HRE Group, has so far been signed by more than 12,300 people.