After a night at a truly wonderful B&B with generous hosts, I awoke to fog in the valley and then cloud, which boded well. A cooler start then and first stop – Hassendean Station. Unfortunately my arrival coincided with what seemed like the whole family who live there being out on the drive. The longer I stayed the more suspicious I must have appeared, so I beat a decent retreat and got the best photo I could through a gap in the hedge from the lane.

I understand Phil Earnshaw has negotiated a proper visit in the autumn, so I’ll await a stack of excellent photos from inside the site for the magazine!

To whet your appetite- it certainly looks well preserved.

My average speed was well down on yesterday due to a very up and down terrain (ie. hilly), the sun deciding to return with a vengeance from about 11.30, and muscles that refused to work.

Here’s a genuine mystery photo for you – this pillar stands on the river bank at Denholm. 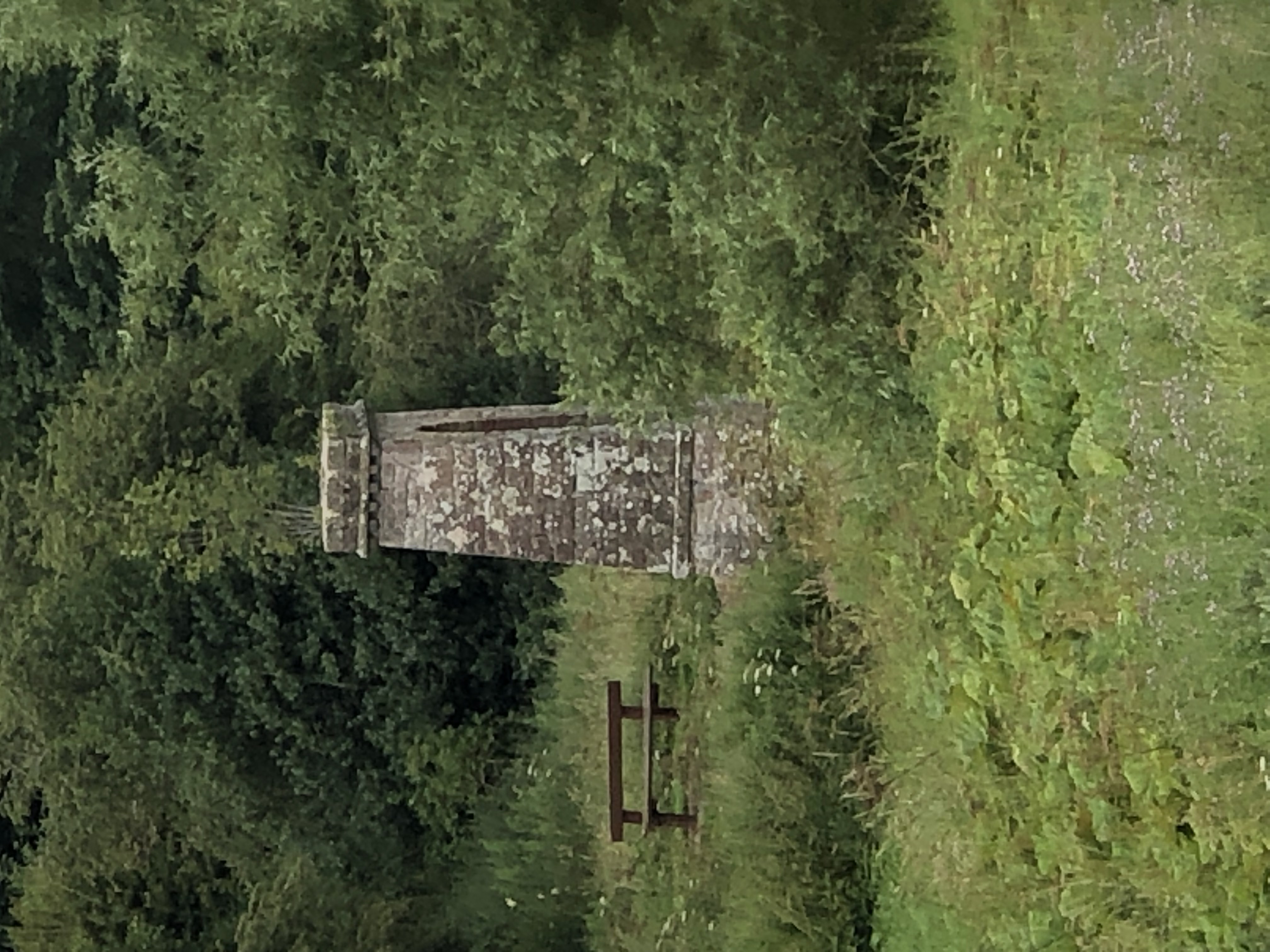 Lindean Station, forewarned by the Disused Stations website, turned out to be a nondescript bungalow called Station Cottage, so cycled straight past. 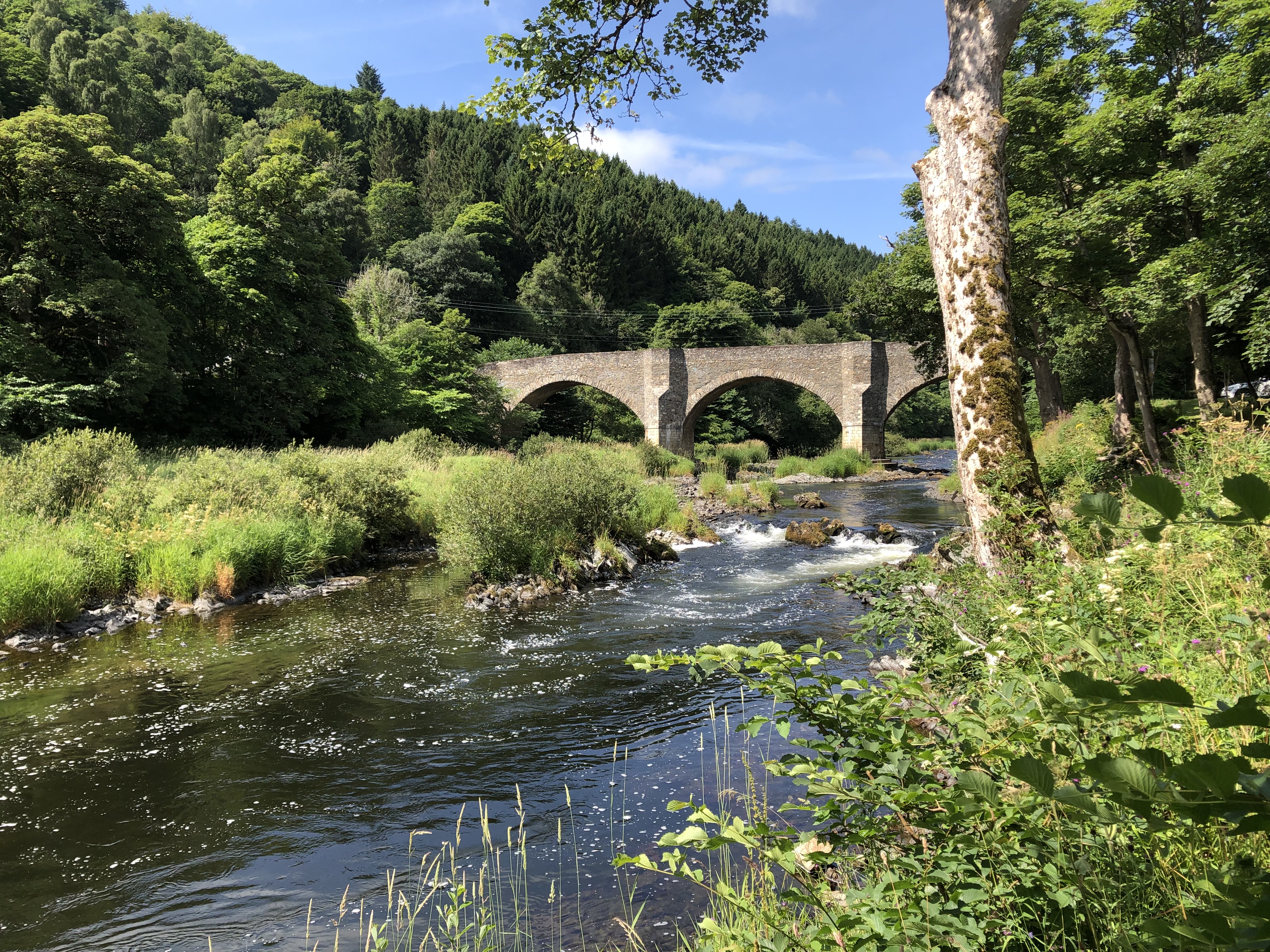 Then what the weary cyclist had been waiting for…a tarmaced trackbed – along the Tweed for 5 glorious miles into Peebles, with a coffee en route in the old Cardrona Station thrown in for good measure! 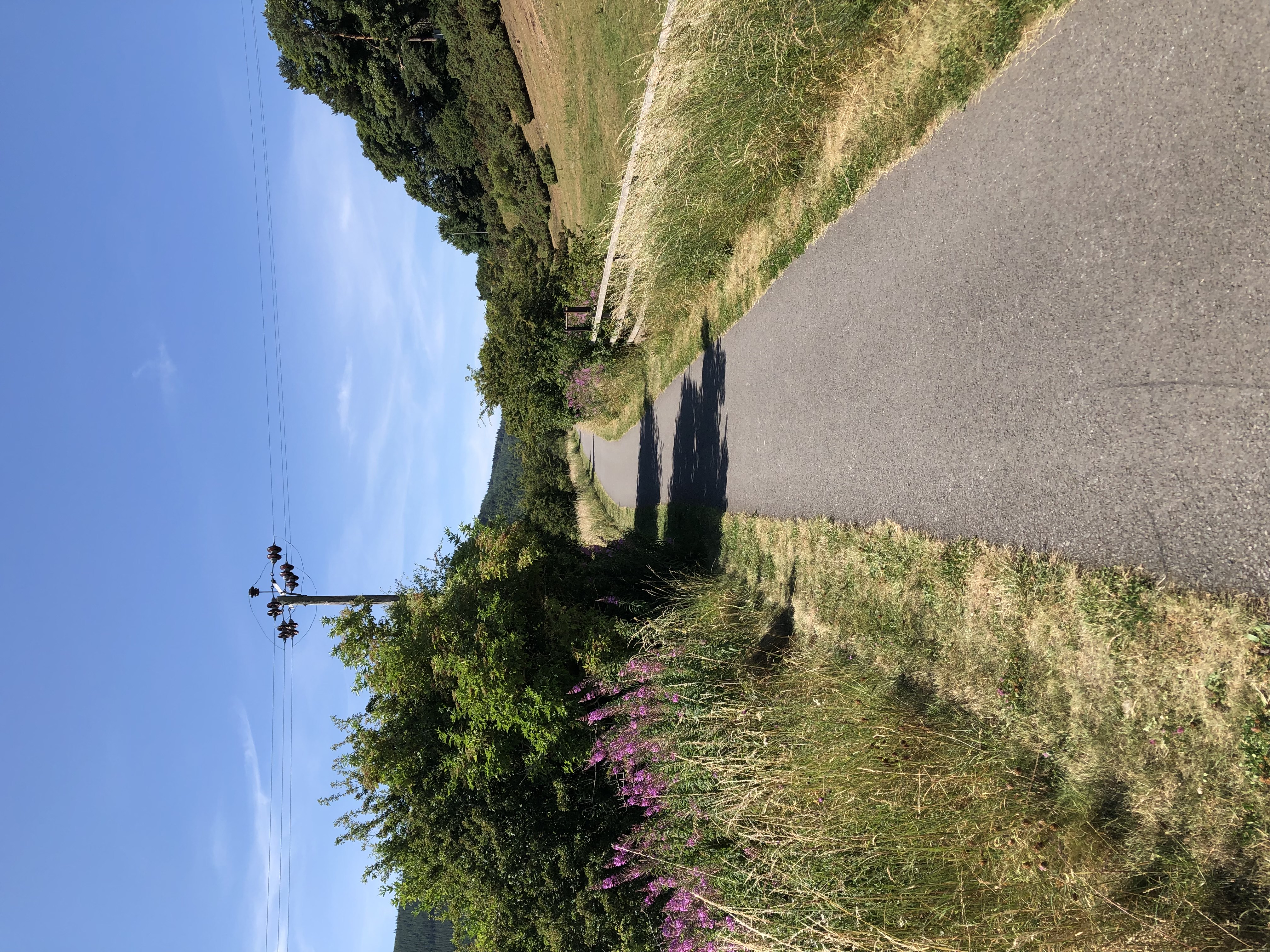 There was also a virtually literal hidden gem at Innerleithen Station, where they’ve kept out restored the canopy, platform, etc – but they’ve also kept it private!

There was quite a party going on the platform side of Cardrona Station…the ladies gave me their permission as I said they might make it into the magazine (at least, I think that’s what they said 😜😜).

All good things must come to an end and the trail does, albeit in the delightful town of Peebles. 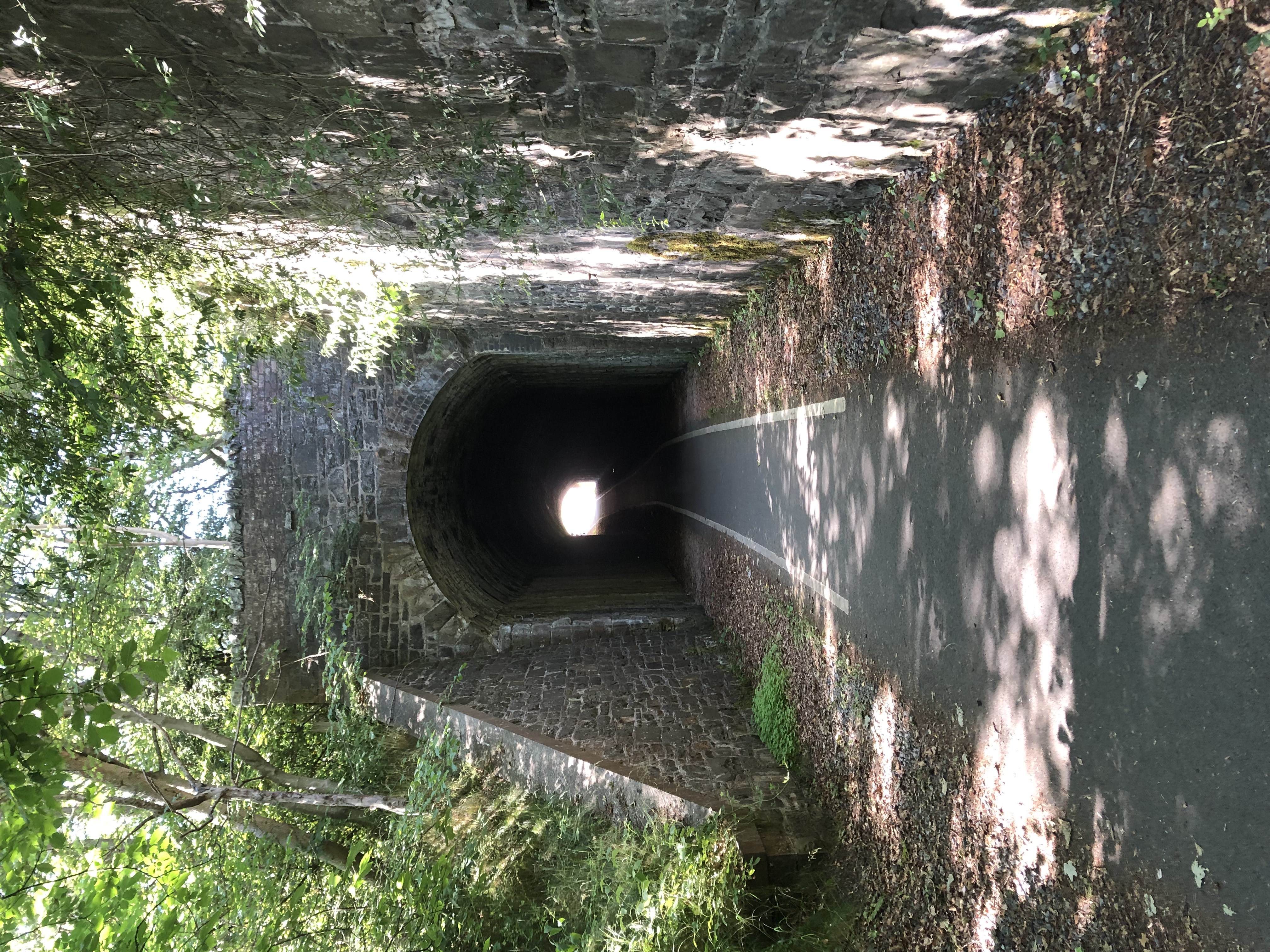 The short tunnel just before the town 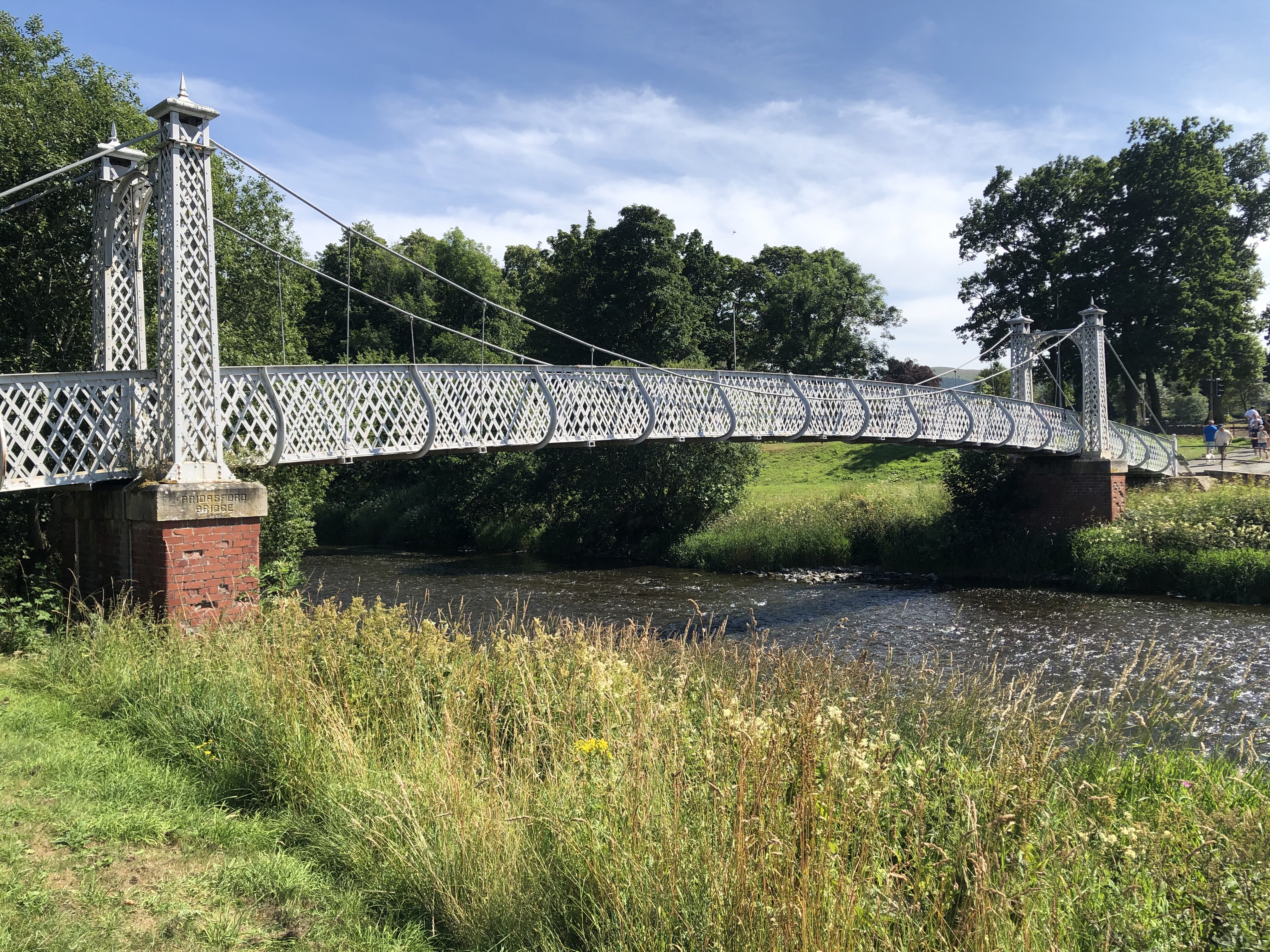 A footbridge in Peebles; no railway provenance The less said about the last 13 miles into Penicuik the better: a horribly busy road, an equally bad surface on much of it, and with the habit of going uphill! The only mitigating circumstance- Edleston Station just off the route.

Thanks so much for your interest – I hope these blogs are not too tedious for you. We would love to have your feedback.

3 trains, all bang on time (though I could have lived without the accompaniment of a very loud stag do group – at 9 in the morning!) delivered me to Hexham. The first point of interest were the remaining piers of the bridge over the Tyne that carried the line to Riccarton Junction. 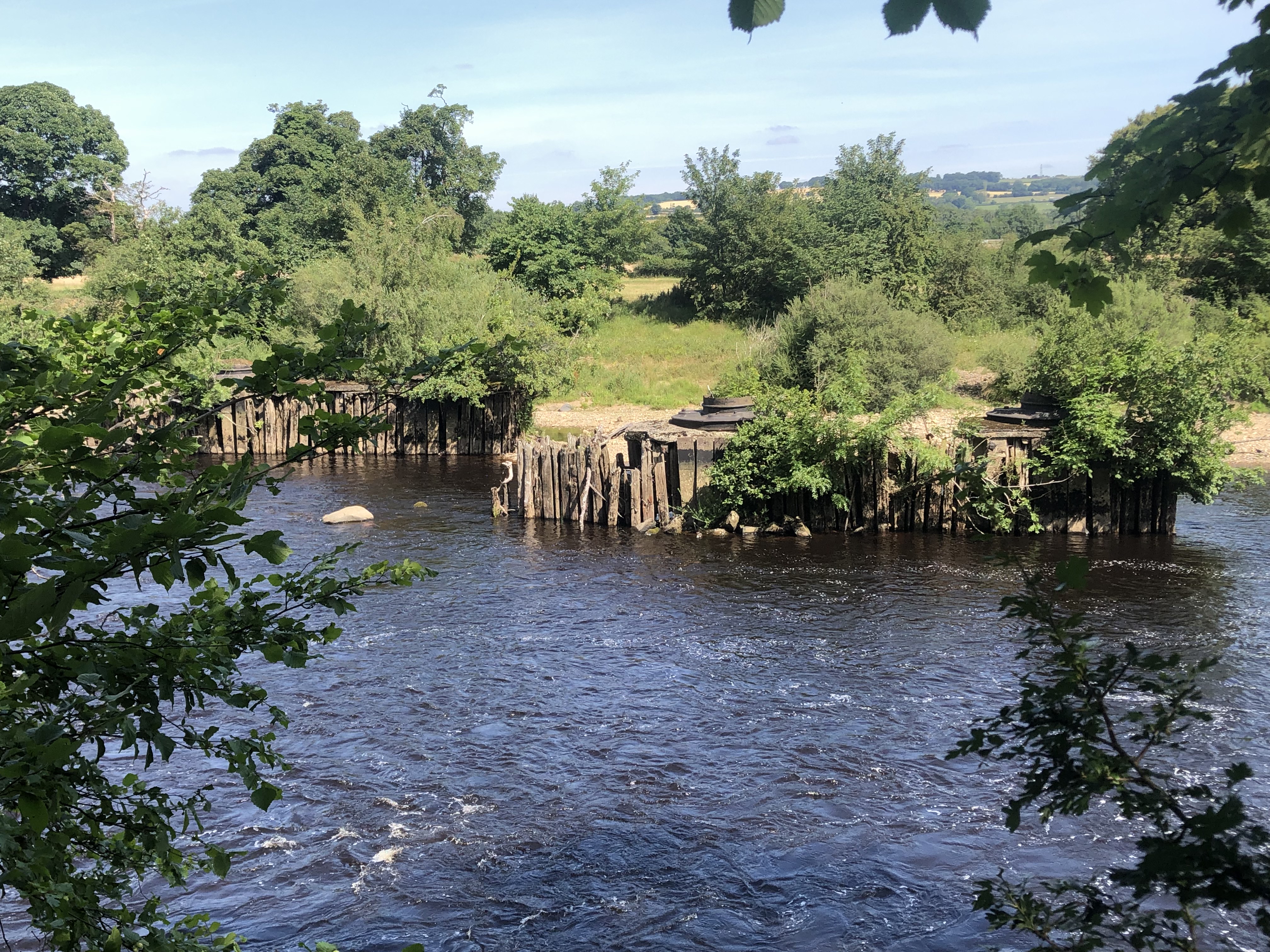 Next up was Chollerford Station, which looked delightful with canopy through the foliage but a close-up photo would only be possible in winter(picture from afar!)


The bridge over the Bingfield road is lovely and the viaduct at Chollerton impressive.


A road closure which added 6 miles to my ride meant I couldn’t visit Barrasford so the next rail-related site was the Heritage Centre and tearoom at Bellingham (picture 5). 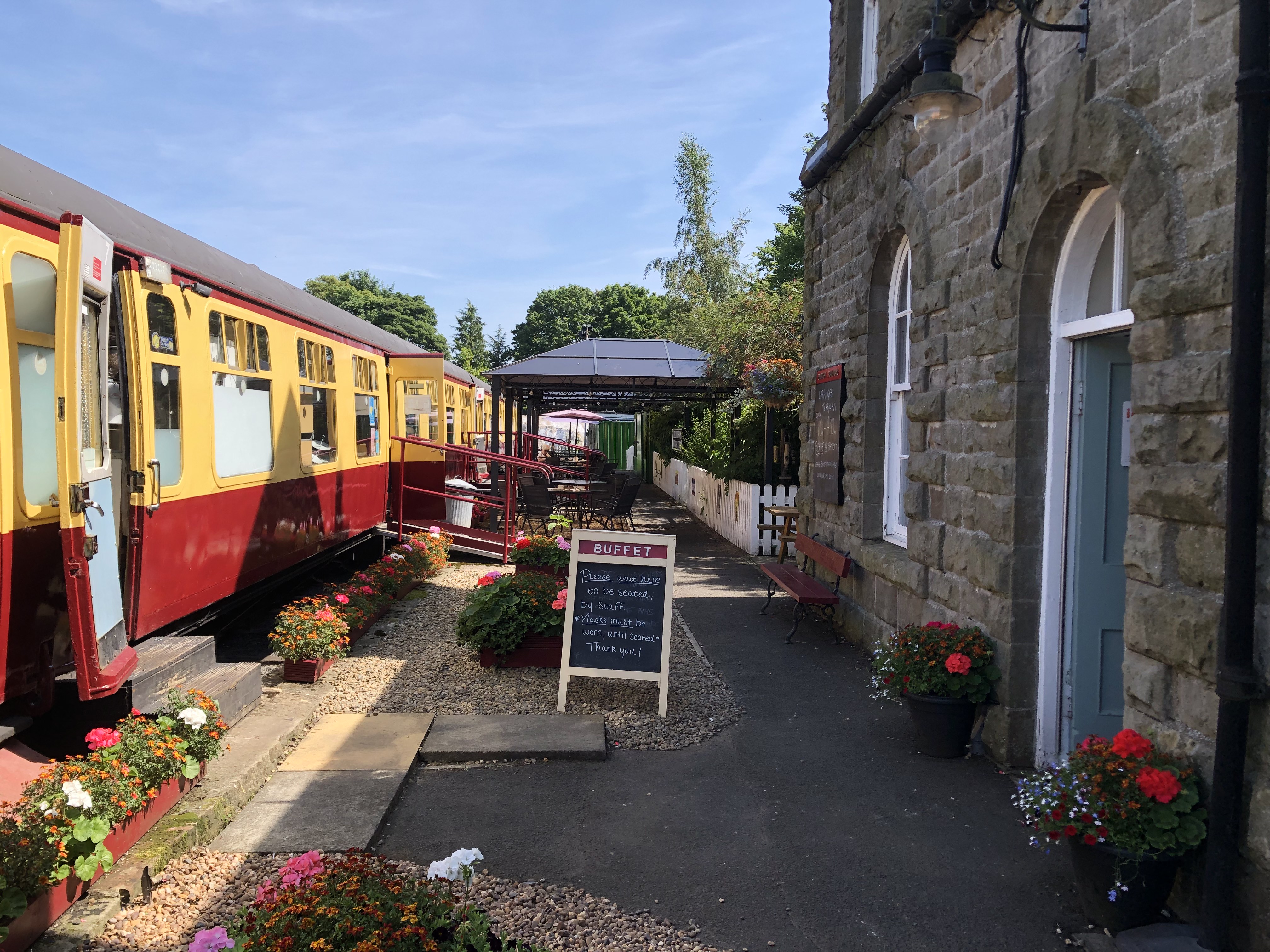 The main issue on Day 1 was the heat which sapped any energy I’d had to start with. Hills became, how can I put it, opportunities to view the landscape! And the Northumbrian scenery was stunning. After leaving Bellingham I headed for my railway highlight of the day – what must rank as one of the most isolated stations in England: Thorneyburn. 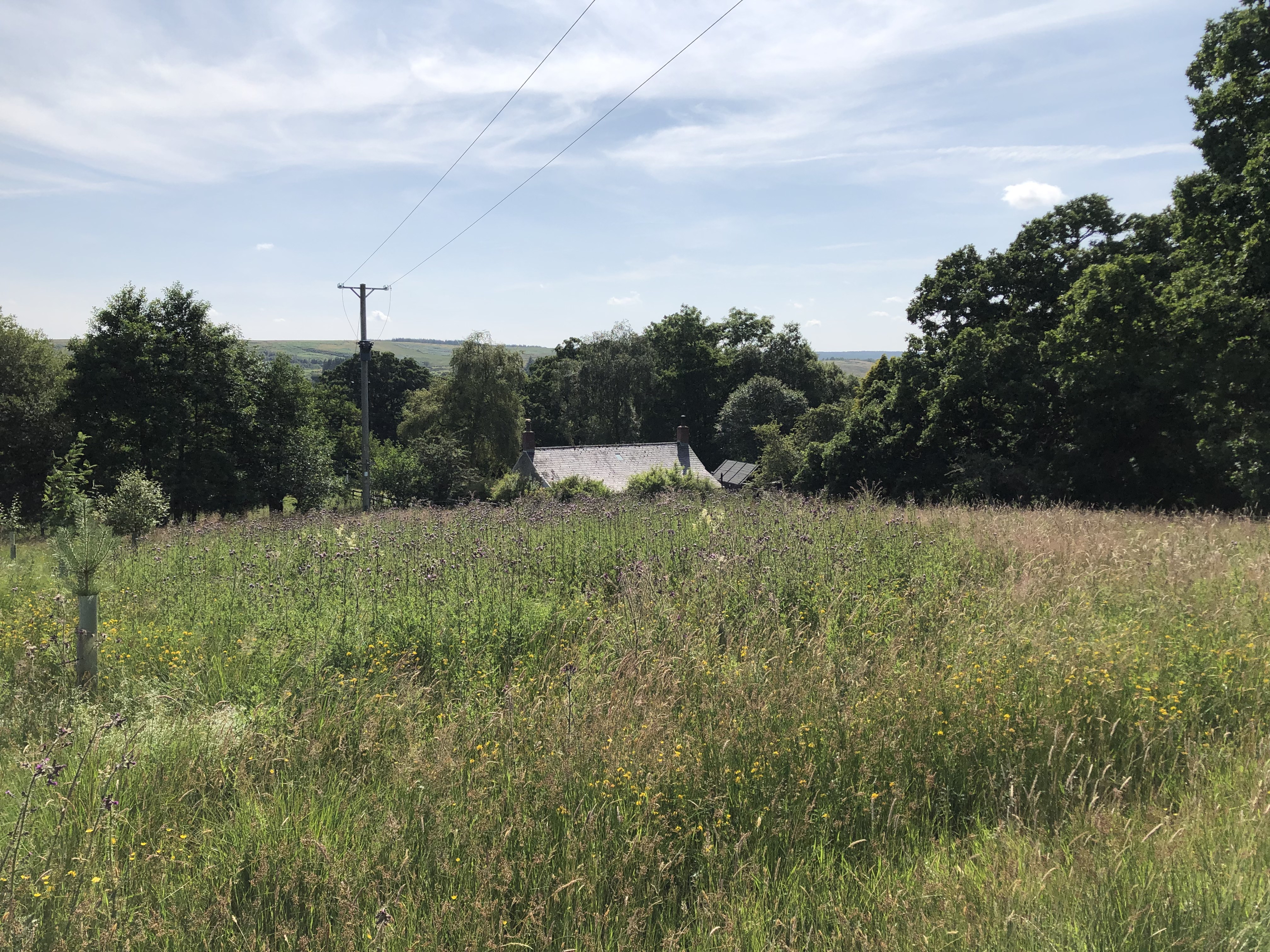 It appears out of the woods… 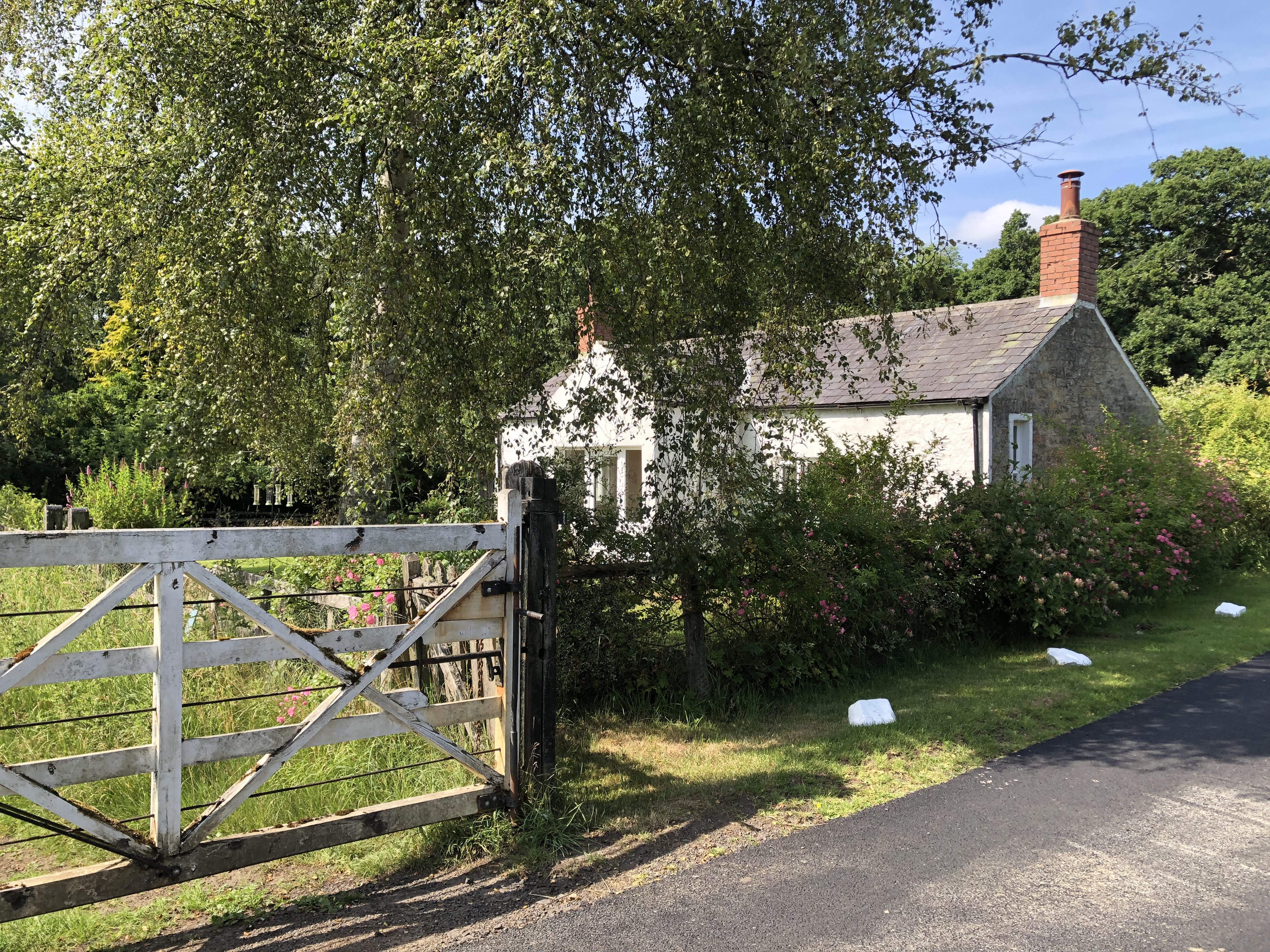 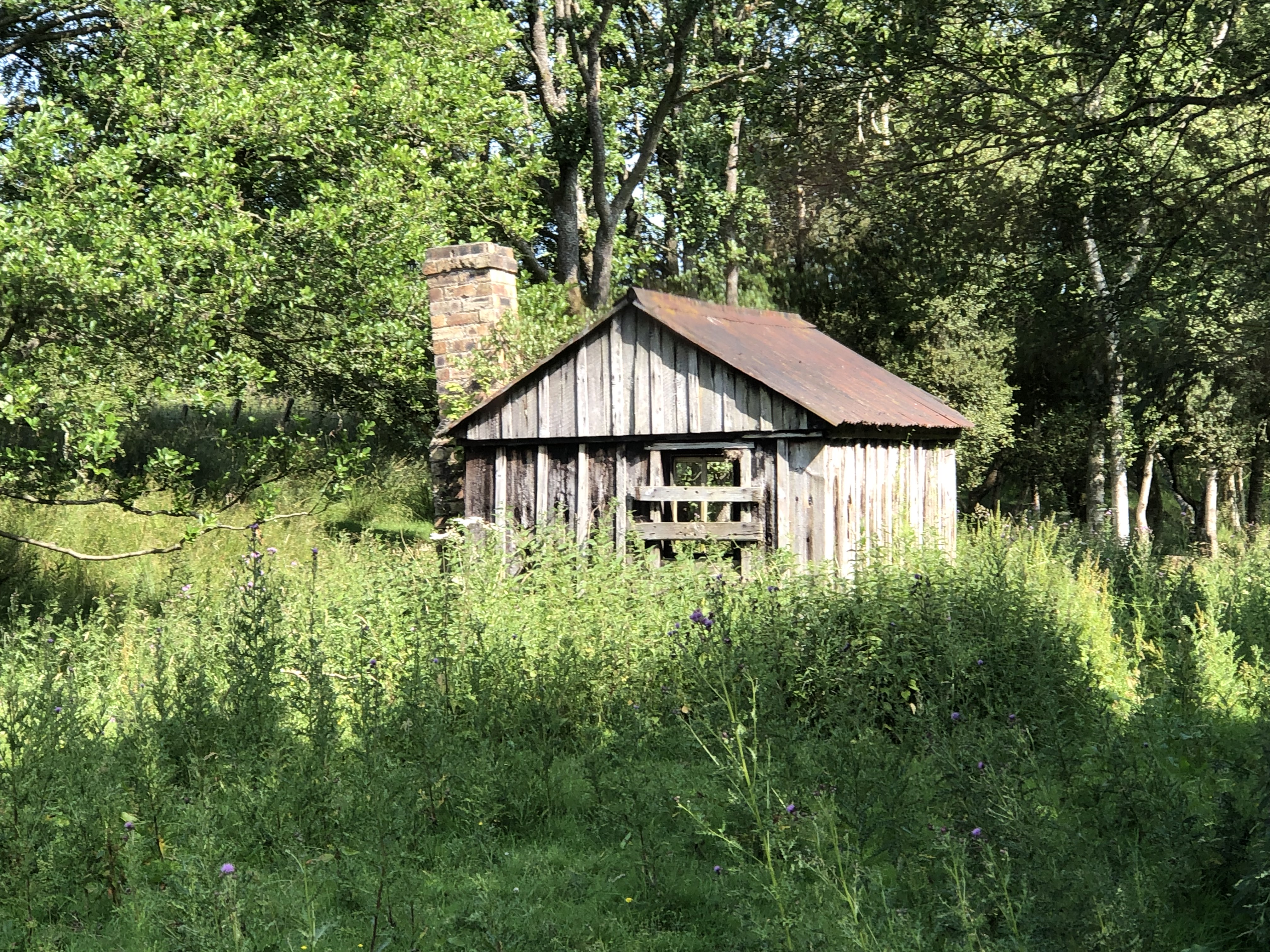 Would certainly be a quiet place to live!


After this the farmer had to clear the road of cows so we could continue, while the old line kept appearing and disappearing until I reached Falstone Station.


Hmm, the ‘box’
The path then finally joined the trackbed


But beyond Kielder Dam the surface was not conducive to my road bike so I had no choice but return to the road- and a lengthy detour.

One kindly soul gave me a water top-up and another some energy gels as I struggled up the long hill out of Saughtree. By this time I’d crossed the border into Scotland, passed Deadwater Station and given a tired nod in the direction of Saughtree station high up on the hillside.

Eventually reaching Bonchester Bridge, where I had booked a meal but was so late they’d stopped serving (!), I quickly downed a pint instead and rode on the last 3 miles to my B&B.

◄ Click here to see Day 3 and 4 Report and Photographs…